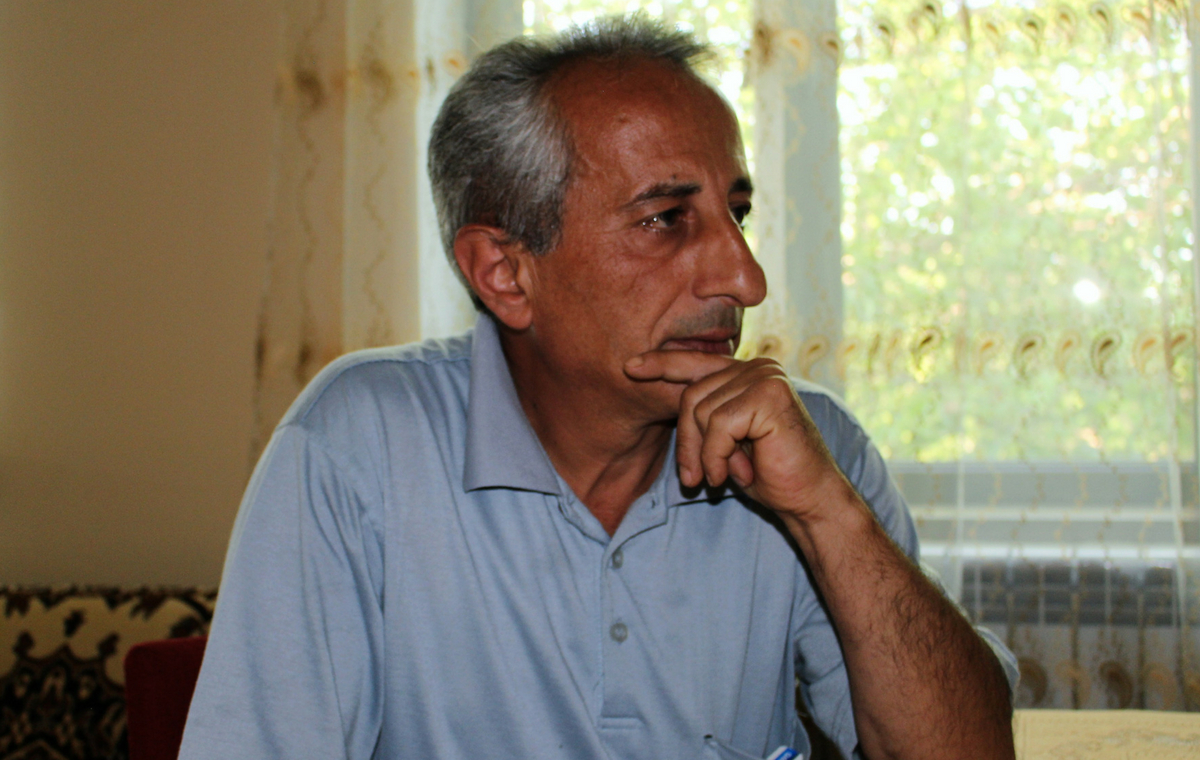 In 2016, in the wake of the Four-Day War, the Tufenkian Foundation started an initiative to provide homes for wounded soldiers of Artsakh. Since then, we have purchased, built, or renovated homes for 15 wounded soldiers across Artsakh. Vachagan Vardazaryan was the first of them.

Vachagan fought in the Artsakh Liberation War of the early 90s and the Four-Day War of April 2016. He served and defended Artsakh for more than ten years until his severe injury on April 2, 2016, the second day of the Four-Day War.

Originally from Goris, 52-year-old Vachagan has lived spent most of his childhood and early youth in Yerevan. However, he considers neither Goris nor Yerevan his hometown. The place he calls home is a small village called Togh in Artsakh.

In Yerevan, he studied animal husbandry in the Agrarian University. But this profession was never his passion. Since he was very young, Vachagan was interested in eastern martial arts, both as a sport and a form of self-defense.

He played a significant role in the development and propagation of martial arts in Armenia. Together with several friends, Vachagan founded the first martial arts clubs in the country – a non-formal karate club. This was before the Artsakh Liberation War that started in the early 90s.

Interestingly, Tatul Krpeyan, an Armenian National Hero, was one of Vachagan's best students.

His interest and expertise with martial arts ended up having a significant impact on Vachagan's life in several different ways. "When I first heard about the [liberation] movement, I knew my training would be useful there, I knew I could help liberate our lands, so I decided to volunteer and join our boys in Artsakh right away."

This was in 1988, when he was a second-year university student, living in Yerevan. This was the start of his new life.

He joined the volunteer group in Mataghis and became one of the brave men who risked their lives to defend and liberate the historic Armenian lands that had been occupied for more than 70 years.

"I don't like telling stories from the war. All I can say is our duty to liberate Artsakh finally, and I am a happy man to have been a part of the movement", said Vachagan humbly. He was more enthusiastic when telling about how he made up his mind to move to Artsakh and live here once the war was over.

Soon, Vachagan married a woman from the Togh village, where their family currently lives. "This is where the movement started back in the day," said Vachagan. This was where he fell in love with his future wife and fell in love with Artsakh, which would eventually become his home.

At first, the family lived in Yerevan, where Vachagan continued his involvement in martial arts, focusing on the development of this sport and teaching the younger generation. However, he never cut his connections to Artsakh. "Something always called me to Artsakh, and in a way, I knew a long time ago that sooner or later, I would end up living here." During this time, the family would visit Artsakh two-three times a year.

Vachagan loved the nature and people of Artsakh, but he also thought that his martial arts skills and military experience would be most useful here. He helped to liberate these lands, and now he wanted to live here.

Finally, in 2004, the family moved to Artsakh and settled in the Togh village, the native town of Vachagan's wife. Immediately, Vachagan started working towards establishing a martial arts club in the community. For two years, he focused on teaching martial arts to children and young people from Togh and the neighboring villages.

In 2006, Vachagan learned about another great opportunity to serve Artsakh. An intelligence unit of the Artsakh Defence Army was established nearby the Togh village, and they needed officers. Once again, Vachagan tied his life to the Artsakh Army and served for ten years.

"Never once did I have a moment of hesitation about moving to Artsakh or dedicating my life to the Artsakh army. This wasn't just a job. This was my life's mission".

On the night of April 2, 2016, when the Four Day War started, Vachagan was on the front-line, carrying out an individual task with his group of soldiers. They were already on their way back, preparing to move to another location for a different job when it all started. Vachagan immediately regrouped his soldiers and went back up to the front-line.

"3 of my brothers in arms fell during that night... 3 of my good friends...men like mountains... it all happened so quickly". Vachagan's group took responsibility for stopping the enemy's tank attack and bringing back the lost positions. On the second day, they were hit with a shell explosion, which left Vachagan with a severe injury – a shell fragment pierced his spine.

He was immediately transported to Yerevan, hospitalized and operated on. He spent more than a month in the hospital. Since then, he has undergone several more surgeries and faced health difficulties that prevent him from rejoining the army.

Since their move to Artsakh, in 2005, Vachagan and his family lived in severe housing conditions. The house they lived in was damp, dark, cold, and overall bad shape and the family couldn't afford to renovate it.

Over the years, the home had deteriorated, and in 2016, when Vachagan was dealing with his injury and medical complications, the housing situation had become unbearable. It was especially painful because of his wounds; Vachagan wouldn't be able to repair the house himself. And, now that he had retired from the army and spent most of his time at home, changing their housing situation had become very important. "I have seen two wars. I'm not a man that likes to complain about material things, but living in that homemade our lives extremely difficult".

During this time, both of Vachagan's sons were in the army, one serving as a contracting officer, and the other was in the middle of his two-year service. All 3 men of the family had been on the front-line, in different locations, during the April War.

This problematic situation, coupled with our gratitude to Vachagan for his bravery and sacrifice when liberating, and later defending Artsakh, was why Vachagan's family became the first to receive a new home from the Tufenkian Foundation. The house started in July 2016 and was completed in November – the house was rebuilt and entirely renovated, turning it into a home fit for a hero like Vachagan.

"Many of the men I fought with found themselves in difficult situations after the war –physically, emotionally, financially.... same for the families of the men who fell during the war. So, this type of support is essential. It doesn't just give these men new homes – it makes them feel valued and respected and gives new hope. It is difficult to have hope when ruins surround you.".

After retiring from the army, Vachagan has found a new interest in agriculture and farming. "I am one of those very few villagers that never worked with on the land, never cultivated anything. I was always too busy with my service in the army. But now, I'm getting more and more interested in this side of village life".

The family is also engaged in animal farming. They keep pigs, cows, rabbits, etc. and are planning to build a barn and expand their farming activities.

"Yes, I will stay in Artsakh until my last days, and I believe my sons will do the same. This is our home now. We have no reason to leave, and all the reasons to stay."